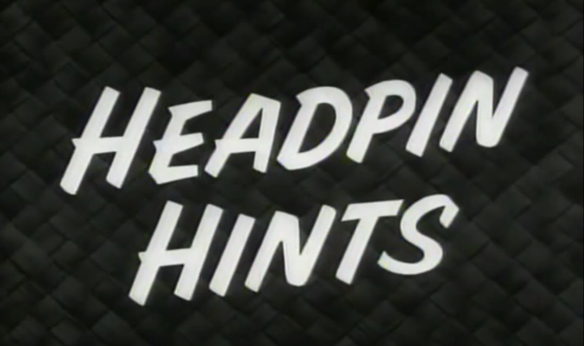 Headpin Hints is an eight-minute movie of people bowling in 1950s Newark, and since that about sums it up, let me go straight into the question of the ephemeral internet archive, because nobody’s gonna read this one anyway.

I became aware of Headpin Hints while planning a completely unrelated research trip to the Wisconsin Historical Society, exploring their Newark-related film holdings because hey, why not! This was around 2013, and I finally went in 2014.

At this point, you could not see the movie anywhere, and the most expansive library database out there, WorldCat, listed it in only two places, Wisconsin and UCLA. So I was pretty psyched for this extremely rare short. They even brought out the old film deck for me!

And then right before I watched it, I did one more quick Google search. And oh! There it suddenly was, on YouTube. So that was anticlimactic. I became the researcher David Bordwell wrote about at almost that exact same moment (“With so many films easily available on digital formats, people who relied upon archives have found other options. I’ve been told by archivists that requests to watch items are less common from the general public and certain professional sectors”). I watched it online, took the screencaps in this post, and then sat on it for five years because it’s just not that exciting to blog about a bowling short. (I did still use the deck for another rare film, which I will someday get to, I swear).

So here we are in 2019—who’d’ve ever thunk we could look back fondly on those Obama years of Teabaggers and kinder, gentler drone strikes, sigh—and now Headpin Hints is nowhere to be found on YouTube. Looks like TCM put the clamp down, and I guess if you’re a subscriber you can see it there, but its more open accessibility was a fleeting thing, maybe the last gasp of a more liberated internet before the powers that be figured out how to reassert control, such that I put Smashing Pumpkins on YouTube in the background while I showered the other day and “Cherub Rock” was interrupted midstream by a commercial, which just seemed unjust because I would have played the CD I’ve owned since 1993 but my laptop no longer has a drive for it and get off my lawn anyway.

Headpin Hints might not circulate widely today, but thirty million people saw it in 1956, or so I’m told:

It offers a brief instructional overview of the rules of the game, which might seem unnecessary today but came right as bowling was undergoing a massive transformation from disreputable working-class sport to safe suburban middle-class leisure culture. Andrew Hurley’s 2001 book Diners, Bowling Alleys, and Trailer Parks: Chasing the American Dream in Postwar Consumer Culture taught me all that I know about the history of bowling, but it resonates remarkably well with the details in Headpin. 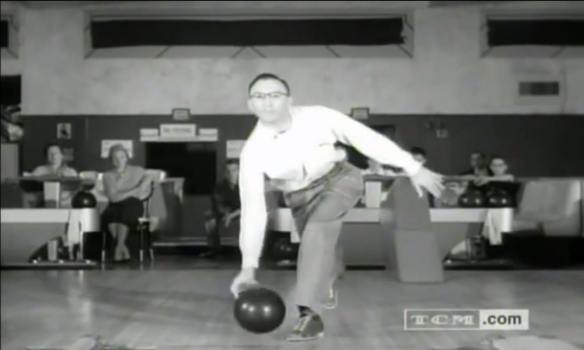 The film, after all, begins by touting the new system of automated ball retrieval—the “answer to that old traffic jam at the ball racks”—and indeed, as Hurley shows, the automatic pinsetting machine directly led to the “domestication of the bowling alley,” partly from enhanced convenience but also by removing the need for the “surly and reprobate young men manually restoring pins,” who often cursed and even threw pins back at bowlers (not without cause, since hitting them often constituted a cruel side-sport of its own for bowlers).

This also made the bowling alley more inviting for women, and by 1964, with 39 million bowlers, Hurley calls it a national love affair—“the people’s country club,” one developer called alleys. We see that in Headpin Hints: far removed from the masculine world of the saloon, Newark’s Dreamland Bowling Alley (down Frelinghuysen Avenue toward Weequahic in the South Ward) is brightly lit and sanitized, even bringing in Sylvia Wene, “woman bowler of the year,” from Philadelphia to offer tips. 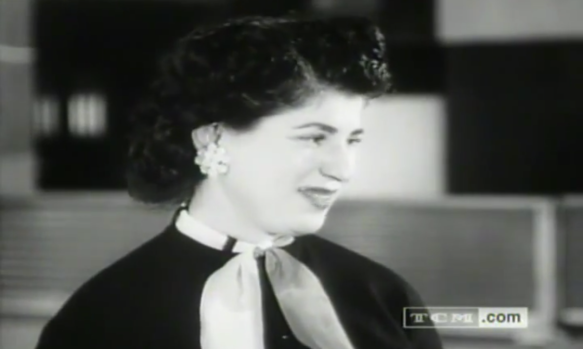 Did you know the 3-7-10 split was called “the sour apple?” As our narrator, Fred Wolf from WXYZ in Detroit notes, “the proof is in the pindicator!”

Also, “for the first time anywhere,” sideways bowling. Do you care? Does anyone care? I don’t. I bowl about once each year to fundraise for the New Jersey Abortion Access Fund, but I’m terrible at it, and I’ve never really enjoyed it. So I spend most of Headpin Hints vaguely nodding my head and mostly thinking one thing, namely, Jesus Christ is every single person here white?! (spoiler: yeah, I think so). 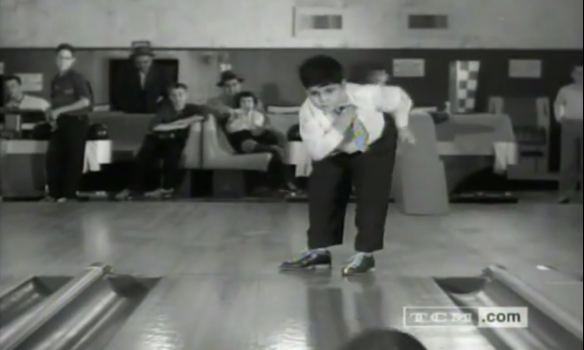 This speaks to racialized histories of both Newark and bowling. On the Newark side, segregation is such a major theme of both the historiography and the previous posts I’ve made that I will simply leave it stipulated as one of the structuring principles of this leisure culture. Indeed, Hurley’s book show the full racist brutality undergirding the history of bowling, whose various leagues and associations strenuously resisted integration until, in 1968, the Orangeburg Massacre in South Carolina, which left three dead and twenty-seven wounded after highway patrol officers opened fire on protestors, actually began as a demonstration against a racist bowling alley that refused to allow black bowlers.

Headpin Hints elides this exclusion and thus becomes complicit in fashioning an apartheid bowling culture. Indeed, it depoliticizes entirely a densely fraught site of barely-suppressed struggle, where both the Cold War and the class war reverberated. One NYC bowling newsletter of the time claimed that “no bowlers ever turn Communist,” since bringing workers and foremen together entailed the “end to any feeling of class consciousness”! Given Newark’s rich communist and socialist history, I hope Headpin Hints accidentally catches a secret revolutionary gleam in the eye of someone who bowled by evening and plotted by day. Perhaps.

It doesn’t do much to capture Newark scenery, though. Beyond the shots of lanes and bowlers, we get exactly one exterior shot, though it’s a nice one, with the neon-pin signage: 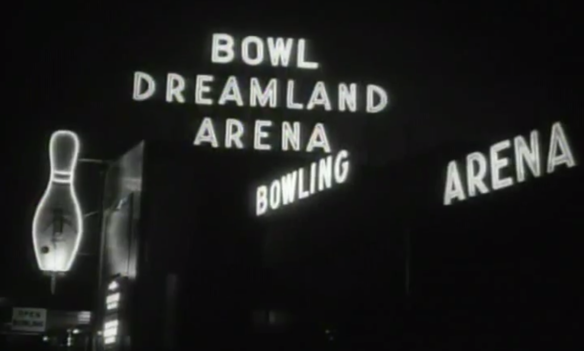 I’m not sure about that thirty-million figure, but Headpin‘s distribution, as part of RKO’s Sportways series, was wide, appended to Hollywood fare like this (which I confess, I’ve never seen, and now kind of want to):

That was the Brownwood, Texas, Bulletin, June 19, 1956; here’s the Holland, Michigan, Evening-Sentinel from that February:

It got special attention in Detroit because of DJ Wolf: 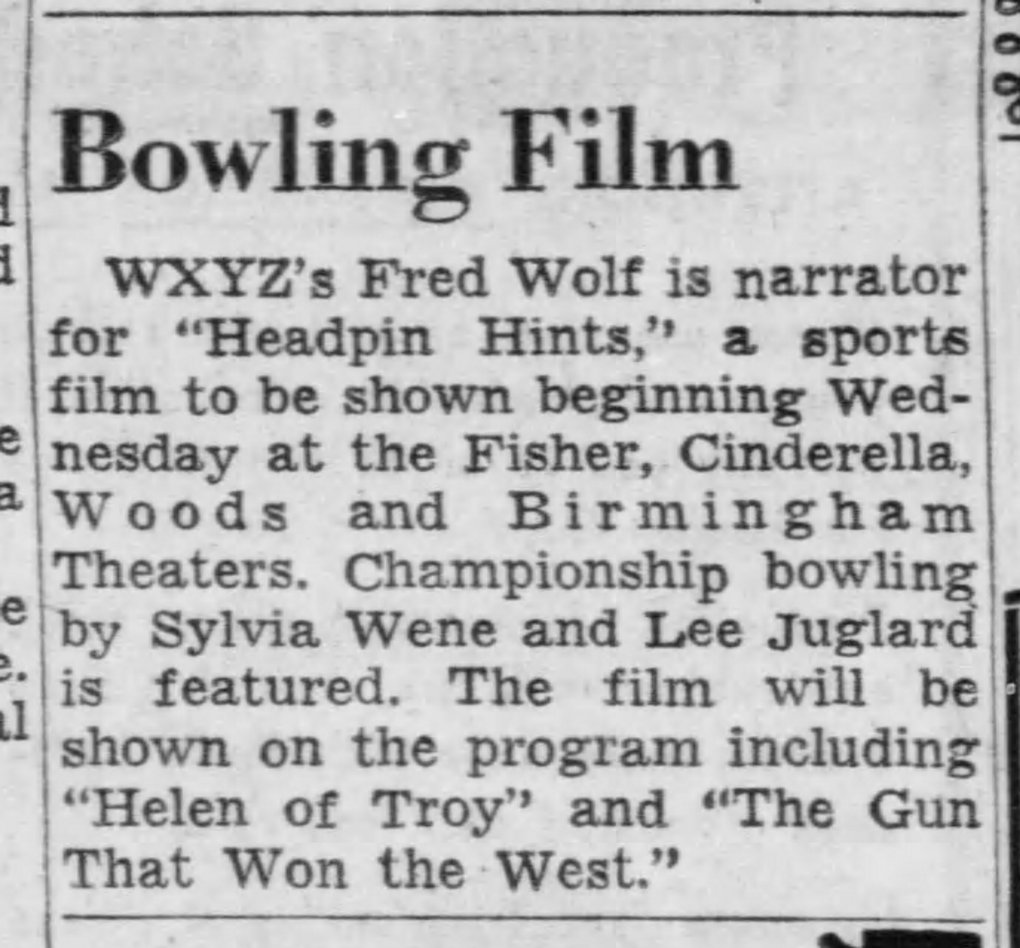 It’s somewhere here in the Detroit Free Press, April 1956; mostly I just like this ad:

And finally, the Battle Creek Enquirer:

Workmanlike director William Deeke only made five IMBD-recognized shorts, about things like the four-minute mile and shooting birds in Chile, but his real peak came about two decades earlier and an hour down the Jersey coast from Newark, when he caught this iconic scene of the Hindenburg disaster for a Pathé newsreel:

Some white people bowling in Newark was one hell of a step down from that, but at least Headpin Hints gives a glimpse at an otherwise largely unrecorded social formation. Despite its bourgeois aspirations, bowling would serve as something of a metonym for “white working-class culture” for a few decades, until its gradual decline. While a 1990s cinematic revival of sorts happened with Kingpin and The Big Lebowski, that didn’t stop bowling from becoming a mournful marker of the decline of a certain kind of participatory community in Robert Putnam’s much-read Bowling Alone. Just look how sad Robert Mitchum looked already in the 1971 bummer-flick Going Home.

More on the wonderfully-named Dreamland at the always-vividly-illustrated Newark’s Attic, which notes that the bowling alley grew out of a larger amusement park right down the street, and superbly researched piece on it at Forgotten Roller Rinks of the Past, too (for more on Dreamland and roller skating, stay tuned for part 2 of this riveting series!).

As Newark’s Attic notes, Dreamland closed in the early 1960s, and the building burned down in 1965. Public housing was built on the block, and here’s the Google aerial view today: 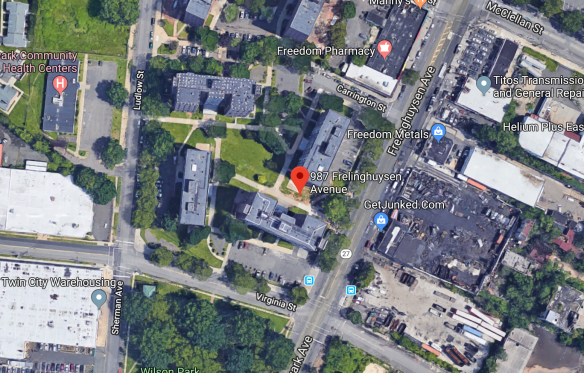 By chance, I was just there last week, to visit another overlooked piece of Newark history, Allen Ginsberg’s grave, located just a few blocks away at Gomel Chesed Cemetery. Today—June 3—happens to be Ginsberg’s birthday, so while it has nothing to do with Headpin Hints or bowling, in the spirit of Old South-Ward Newark history, here’s a poem I wrote for Ginsberg last week. Had only I known at the time, I would have squeezed in a Dreamland/bowling reference! 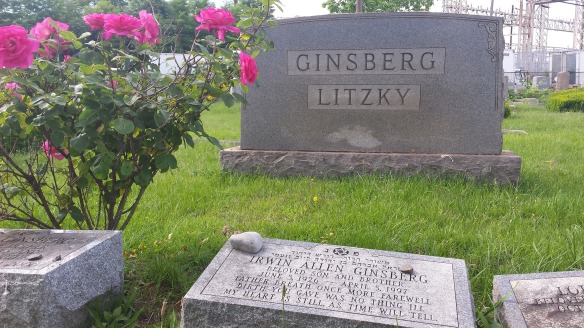 What thoughts I have of you today, Allen Ginsberg, for I sat by your gravestone in the shadow of the Budweiser brewery self-conscious about communing with you on this Memorial Day but committed to seeing it through nonetheless.

Here we are in this America that you told to fuck itself with its atom bomb but instead it vomited up its foulest innards in the shape of a racist real estate crook from the outer boroughs where you cruised and conspired, and the joke is on all of us but I can’t tell if your ashes are laughing here where the awful chemical smell of the trucking station through the chainlink fence wafts over across your family’s resting place.

But I think they are.

I saw you, Allen Ginsberg, marching with NAMBLA in the Seventies, target of Andrea Dworkin’s rage, that whole Naropa trip, I don’t know what to think.

I like your poems until about 1959, and after that, we’ll have to agree to disagree.

This isn’t your Newark anymore, and it’s not mine either, but if you see LeRoi Jones wherever you are, tell him his son grills veggie burgers with Cory Booker. I hope he says “motherfucker” but laughs too. I was in his house once, and Amina still speaks highly of you. Your cemetery makes no sense, though.

Where are we going, Allen Ginsberg? The sun beats on my face, at least your remains are already burnt. Are there any fresh ashes to leer at?

(I read your poems online. I made a big production out of “what price bananas?” in a class once, linking it to US imperialism in Latin America. The students thought I was reading too much into it. But I know your communist spirit, it’s something I do love about you).

I walk with you through history, though you were on the ground in Chicago 1968 Stonewall City Lights Tangier Tompkins Square and I track them through archives and footnotes, which is its own kind of eros.

Ah, dear pervert, fraud and inspiration, I see from Wikipedia that Good Will Hunting is dedicated to your memory and I’m certain we can both find that hilarious.

Things are pretty bad here, Allen Ginsberg, but it was nice to sit with you for a moment and I’m glad that someone still places stones on your grave. 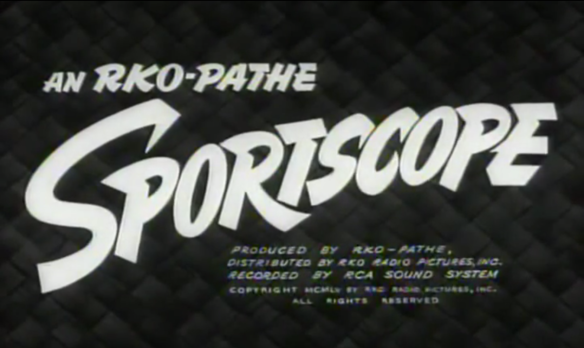